Truth be told, my hopes for this blog were that its presence (and potential, especially as a networking device) would spur me to update frequently. Alas, I confess, I have spent more time tinkering with the layout (which is still woefully lacking) than actually committing to updated blog posts. But, in the spirit of re-invigoration, here is an update on my current work/thoughts/projects.

Last summer, at my internship with Gensler in Seattle, I began research into both the theoretical and practical applications of gestural interfaces in the design process. Herein lies both my passion and my curse: I am just as interested in the background theory of subjects as I am in the nuts-and-bolts of their actual implementation. I.e., while I recognize the need to really understand something fully in order to do it well, I am rarely satisfied if at the end of the day I don’t actually DO it. This can be problematic for me, but I find it fun (if challenging). It lands me in philosophical debates one minute and computer code tutorials the next. Last summer, it meant that while my area of greatest “expertise” and experimentation was with Grasshopper’s ability to facilitate a gestural interface (see some early attempts here), I was simultaneously reading up about the basic differences between brains and computers. A brief jaunt into neuroscience 101, if you will.

At the beginning of last semester (the start of my fifth and final year in architecture undergrad), I approached my teacher about replacing the typical capstone design project with a research project. After discussing the subject, he consented, meaning I would actually be permitted to continue the research that so enthralled me. During the fall semester, instead of doing the typical Programming research that precedes a capstone design project, I cast a wide net of research interest, collecting books and organizing thoughts about a variety of subjects. At the end of the semester, I had composed a series of blog posts covering five topics (Science and Style, Technological Development, Complexity, Neuroscience, and Virtuality). The work was supplemented with an Abstract and a Discussion that attempted to draw the necessary connections and establish the underlying themes, as well as a Proposal that would outline my preliminary ideas for what I would do this semester (Spring). While I am not sure how all of this broad (rather un-scientific) research will tie in to my final work, I’ve composed it into a semi-finished state, one day to be expanded, I hope…

This semester, I have sought the counsel of a number of faculty in an effort to hone in on a legitimate area of research and study. Per their advice, I have spent the first few weeks of the semester figuring out exactly what areas of study are directly connected to my particular interest, isolating the overlap between those fields, and researching essentially EVERYTHING I can find about those overlaps. As you might have guessed by my theory/practicality rant, the particular subject that I’m researching lies at the overlap of the Design Process, Human-Computer Interaction, and Cognitive Psychology. This broaches a variety of topics covering everything from the nature of creativity within the design process to modern CAD/CAM practices (see below). 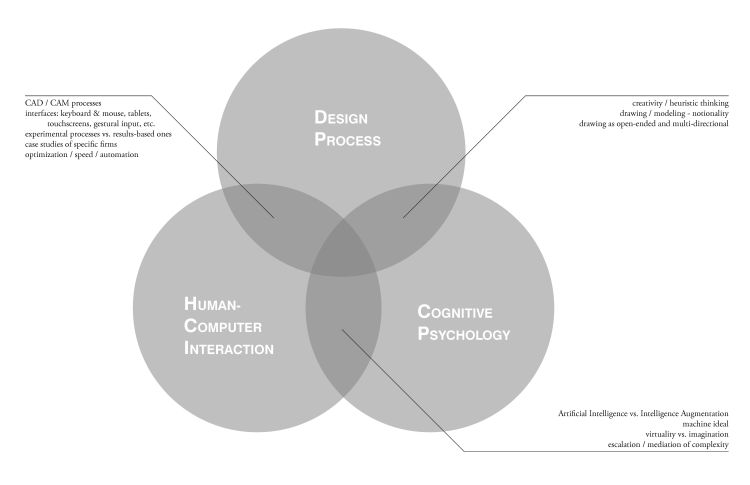 I am hoping to conclude reading in the next couple of weeks and spend the middle third of the semester composing my own thoughts on the matter. Ideally, I would like to construct some kind of proof-of-concept software/hardware setup in order to demonstrate those thoughts, but that will certainly be a test of time. 😉 While I’m not sure exactly what that will be or what direction it will go, many of my thoughts seem to relate back to the theory that our perception of “digital” as “virtual” is leading us astray (for a quick entry into the topic, look up Elizabeth Grosz’s article “Cyberspace, Virtuality, and the Real: Some Architectural Reflections”). Perhaps the final construction will be something that re-relates and enhances our understanding of digital content as physical THINGS, rather than boundless notions – a hybrid digital/analog modeling process, or maybe a physical apparatus that performs a digital task in an effort to reinforce our sensory understanding of digital data. Design is a fluid process of translation and re-representation, the pathways of which provide the influences (intentional or un-) that lead to “development.” Allowing our digital models to parade as virtual notions strips them of the physical resistance typically offered by our constructions – resistance that is oh-so-necessary in the design process.

Forgive any lack of clarity – these thoughts are young yet, though I am excited about where they are going. Hopefully they will lead somewhere in the coming months! In the meantime, I would like to post about some phenomenal work I’ve stumbled across recently. Andrew Heumann, a digital designer working for NBBJ in Seattle, recently published an article on the ACADIA website about what digital design can learn from drawing. Alongside a video of some of my attempts at gestural interfaces, he posted the following video from Ismail Cimen (part of his master’s degree in Industrial Design from TU Delft):

From there, I jumped over to a video of “Mockup Builder,” a project from Bruno De Araujo, Gery Casiez, and Joaquim Jorge that demonstrates a semi-immersive environment featuring a head-tracking tabletop display.

Finally, I also found another feature on the ACADIA website – this one of a group called the Collaborative Design Platform and their 3D virtual sketching setup.

All incredibly impressive examples. The world of gesture-based interfaces is rapidly developing, and while it may be a while before it sees the level of success and accuracy afforded by typical graphic user interfaces, I fully believe that it will be relentlessly pursued until it reaches just such fidelity. While my current schoolwork is carrying me heavily in the direction of theory and research, I hope one day to be able to contribute to this exciting field.