Well, I guess I never wrote a “Semester 4” recap. There are a number of reason for that – but for now, I’ll just co-opt the fact that it’s better to tell the story of Semesters 4 and 5 together. Here goes:

My fourth semester was supposed to be my last… That obviously ended up not being the case, but I’ll go into that later. It was my thesis semester, and that work occupied the large majority of my time. My only other class was Shape Grammars II, again taught by George Stiny. I’ve enjoyed taking classes with Stiny not necessarily (only) for the content, but for the side effects: Certain environments, I’ve found, encourage and accelerate my thinking more than others. Curiously, I can sit in front of a computer for hours and gaze uninspired into the vast nothingness of the internet; but the moment I get up and walk around campus or Cambridge, my mind races with possibilities for work and research. Stiny’s classes are just that type of environment – they serve as a kind of incubation ground for thought. Listening to Stiny’s lectures was a welcome source of encouragement for me, and I did a fair bit of critical brainstorming for my thesis in his class. My only other engagement was some RA work with Terry Knight. MIT is contributing to a package of classes that will be used to kick off the Dubai Institute of Design and Innovation (DIDI). The program pulls from a variety of different design fields, including visual computing, and to this end Terry contributed class materials for her course Visual Computing II. I helped put the material together, which gave me the opportunity to see an entirely different pedagogical approach to shape grammars.

Again, however, the bulk of my time during the semester was spent on my thesis. Titled Ludus Ex Machina: Toward Computational Play, the thesis formalizes my framework for computational play and describes my attempts to implement that framework in a drawing machine. In many ways, I suppose this work was a recapitulation of the work I did with my undergraduate thesis, Digital Play. But it was a necessary recapitulation. That work was broad and stumbling; with this work, I sought to refine and focus my inquiry. Of course, even this attempt is, by many standards, still quite a broad stroke – I’m sure future work will seem far more focused in comparison. That seems to be how I am wired, however. I really can’t focus on detailed work without feeling like I have a good grasp of the overall picture, and so I continue to revise my overall conception until it answers even the smallest questions. And while that might not be the preferred model for current scientific research, I am happy with the results. The thesis is an assemblage of a variety of components that together stake out the ground for future research. As I move forward, I intend to take various components of this work – the parts of the framework, the critique of AI, the drawing machine, etc. – and sharpen them as needed into stronger, self-contained, perhaps individually published arguments. Even if the thesis does nothing else, it has encouraged me to pursue my research and has helped me to sharpen my thoughts. 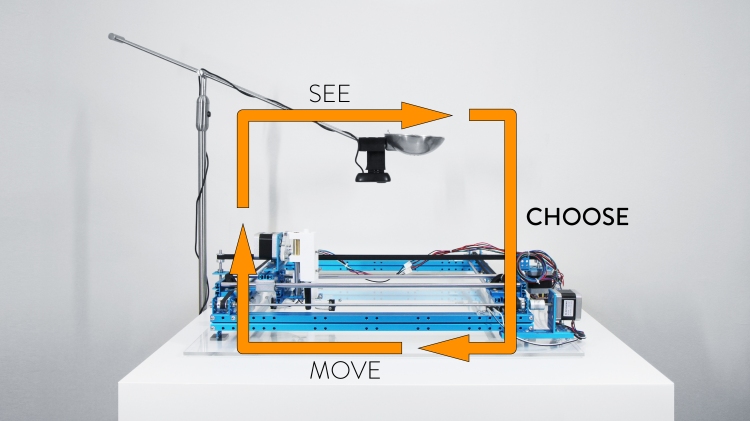 Of course, I still technically haven’t finished it. Due to a (very) tardy application and a few detours in the MIT paperwork machine, my application for a dual degree did not get processed until very late in the semester. In fact, I did not receive final notification of acceptance into the EECS program until the day before I was supposed to turn in my thesis. Thus, I proceeded throughout the entire semester believing I would be graduating in June. I completed my thesis (but didn’t turn it in); my parents booked travel and accommodations to see me graduate; and I continued telling myself that yeah, there was a chance this was the end of my time at MIT. But at the last minute my application was accepted, and I signed on for one more semester.

My parents’ trip was not wasted, of course; we spent a lovely few days together exploring Boston and Rockport. After that brief interlude, I returned to Safdie Architects for the summer. I was actually hired to continue work on the project that I had begun the summer before – a massive competition that was concluding in a few months. I somehow ended up in charge of the organization and printing for the entire delivery – some 50,000 printed pages in multiple copies of around ten different volumes, all packaged and shipped halfway around the world (with, of course, no time or copies to spare). The project consumed the majority of my time and resulted in a summer vastly different from our fun-filled first in Boston. After moving apartments, Amber and I took a much-needed vacation to Copenhagen, Edinburgh, Bergen, and Oslo – and then it was right back to school. 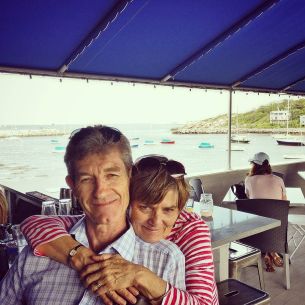 My plan for my 5th semester was simple. Take a few computer science classes (preferably studying machine learning), work about halftime, and publish my thesis. Easy, right? Unfortunately, my aspirations proved far more ambitious than I realized. The classes I wanted to take fell through, and I ended up settling for what I thought would be a fairly routine course: Intro to Probability. The class was split into two half-semester sections, I and reasoned that it could add a nice dimension of rigor to my research. As the semester progressed, however, the class proved difficult. I think it’s fair to argue that the class is oriented to mathematicians and computer scientists, but I also have no qualms about saying that I overestimated my abilities. I found myself investing way too much time trying to figure out what should have been simple problems, and as time went I only fell farther and farther behind. For the end of the first class, halfway through the semester, I dropped all of my other commitments and attempted to cram in preparation for the final exam. I failed miserably.

Curiously, however, despite a final grade that would be a clear F by most rubrics, I ended up with a B- in the class. I’m still not sure why this is the case, but I maintain that while I did learn a lot, I did not earn it. I told myself that I would attempt to do better in the second half-class, but this (obviously) proved even more difficult than the first half. I fell behind beyond any hope of recovery. Some argued that perhaps the teachers didn’t give out anything less than a B, but I didn’t buy it. Out of concern for my degree (if I failed the class, I technically might not graduate), I renegotiated my curriculum application, finally getting out of the requirement to take the second class. I’m happy I finally got out of it (otherwise I’d be desperately studying for an exam right now with next to no chance of passing), but it’s a bit hard not to chalk the class off as a failure. Even if I do get over that, it certainly derailed my semester: I had hoped to study machine learning, in an attempt to carry my research to the next level (and potentially bolster my application for a PhD). I still intend to find a way to study this, but I know it will be infinitely more difficult to keep it going after I graduate.

On the publication front, I had more luck. I successfully presented my (drastically summarized) thesis work at ACADIA 2017: Disciplines and Disruptions, held at MIT, and during that conference I received word that two of my abstracts had been accepted to other conferences. In addition, I’ve found a slew of other conferences that are applicable to my research. I hope to be able to attend a few of these in 2018, although I am going about this in perhaps the worst way possible: on my own, with no monetary support from an affiliation.

I also found some unexpected success with work. I applied to the Design Lab, a research group affiliated with MIT that has employed several of my colleagues. The work has been good, and they have expressed interest in taking me on full time in 2018. My first post-grad career job, I suppose! I’ve always had trouble answering the “So what do you want to do after school…” question, but shy of just being paid to make weird drawing machines and write about play, this job is actually pretty ideal. It functions as a research lab, but honors design as more than simply a problem-solving practice. It’s a small group, it’s affiliated with MIT, and it keeps me embedded in an environment that nurtures my interest in tech and encourages me to keep exploring. Motivation is a tricky thing, but if I had to provide a momentary analysis of how it works, I’d say it’s more important to be driven to work (by a creative environment, and by a rigorous work schedule, and even by compressed personal time) than it is to be free to work. That analysis demands more nuance, but I suppose what I’m trying to say is that I’m excited for the potential this job has to encourage my continued research – even if it’s on the side.

So it’s been a rather anti-climactic end to graduate school, to say the least. No scramble to complete final projects (outside of work), no horrendous concluding exams, no grade anxiety. A strange ending to a semester I’d rank as easily my worst. But while the semester has in no small way been a long, miserable, losing battle, I want to characterize it slightly different going forward, because at the end of the day this description will have a strong influence on how I remember my time at MIT. So to be more positive: I appreciate the relaxed ending. I am grateful to not have to stress about job applications and career moves while I’m still trying to finish up school. I am thankful that I get to stay at MIT, an institution I have dreamed of attending for so many years. And finally, I am happy that I am finishing with two degrees instead of one, with work published (and potentially more to come), and with a good network of friends all around Boston that I can look to for support and inspiration. It is lovely here, and it is unlikely I will ever be in a more exciting and appropriate place for my pursuits. I intend to make the most of it.

To be fair, I don’t turn in my thesis until the middle of January. Maybe that will feel like more of a conclusion. That at least deserves a commemorative post on Instagram, don’t you think? 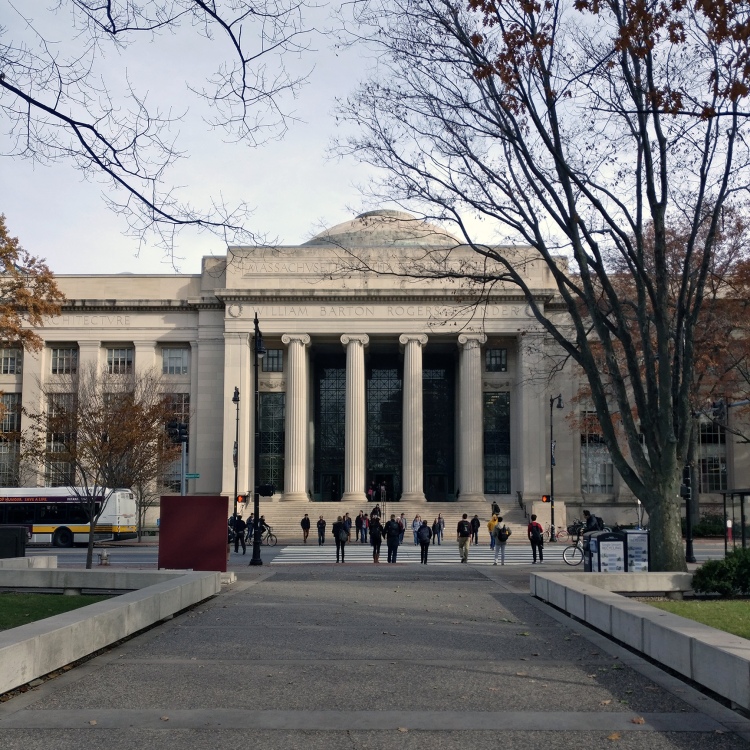